Rubens: The Tarantino of his time?


The literary evening got underway against an unusual background: that of the honking of horns and jubilant cheering as Belgium celebrated a World Cup victory on the streets of Brussels outside. Inside, journalist Laure Adler quipped to the packed hall how touched she was that so many people had turned up to listen to her on the same evening as a national football match.

The Frenchwoman had her Belgian audience on side and didn’t lose them for the duration of her interview about the life and work of the French writer Marguerite Duras, who would have been 100 this year.

Adler, whose 1998 biography of Duras has been reprinted this year, explained how she found Duras to be a writer who pushed the boundaries not only in literature but also in cinema and theatre. Duras is a writer she admires greatly and with whom she has identified ever since reading Un barrage contre le Pacifique at a particularly low moment in her life. Duras was also a writer who Adler had the opportunity to meet on several occasions. 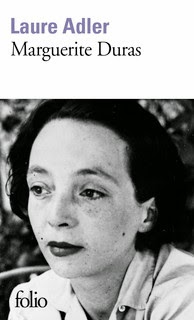 Not everyone has always been so admiring of Duras. Adler mentioned the intellectuals Duras hung around with, many of whom mocked her. In fact, when Adler first approached Gallimard with her idea for a biography of Duras, the response was “You’re mad! No-one is interested in that!”

But Gallimard did publish Adler’s biography and in the intervening years has reprinted Duras’s works in its Folio paperback editions, opening the author up to a new generation of young readers. In China, the author of The Lover and Hiroshima mon Amour is the most read foreign writer!

Back to the drawing board
Adler’s biography on Duras took a while to see the light of day, not least because no sooner had she finished her first draft than Duras entrusted her archives to the Institut Mémoires de l’Édition Contemporaine (IMEC), providing a mass of new source material for the biographer. Adler threw her 700-odd pages straight in the bin and made a fresh start.

If the tales that Adler touched on during her public interview in Brussels this week are anything to go by – Duras’s childhood in Vietnam, her World War II experiences in France, her marriages and affairs, her alcoholism, her relationship with her French teacher mother and her absent father…- the story of the writer’s life almost sounds like a novel in itself.

The evening's interview was interspersed with readings of Duras’s work as well as audio clips of Duras herself speaking, with images of the late author projected on two large screens throughout. The event, organised by Brussels’ international literature house Passa Porta, provided a fascinating insight into a woman whose work I first studied on a film course at university. Given that it’s her centenary year, maybe this is the year to revisit her work; there will certainly be plenty of opportunities to do so.

I cannot wrap up this post without mentioning the venue of this week’s event: La Bellone. What a wonderful architectural discovery in the centre of Brussels! From the main street (Rue de Flandre 46) the building isn’t particularly striking, but enter and the main corridor opens on to a covered courtyard dominated by a magnificent 17th century façade. Built by Cosyn, the same architect who designed the Maison des Boulangers (Roi d’Espagne) on Brussels’ central square, this hidden gem is today a listed building.
Posted by Anna Jenkinson at 12:27 No comments:

Last night saw the start of the KlaraFestival's 10th birthday party - and what a way to kick off the two-week celebration! The audience was treated to a modern and contemporary programme played by one of the world's top orchestras, the Royal Concertgebouw Amsterdam, and one of the best known soloists in the classical world, the Chinese pianist Lang Lang.

The organisers promised a festival of fireworks and if the opening concert is anything to go by, then concert goers are not going to be disappointed.

Lang Lang was clearly the main draw of the evening, and it was his performance of Ravel's concerto for piano and orchestra in G that was chosen to round off the Saturday night programme. Jazzy, jaunty, exhilarating and exciting, there can't have been an audience member who didn't leave the hall with a smile on his or her face. It felt about as far from the clichéd image of a stuffy classical concert as you can get.

And in a way that's what the KlaraFestival is about. It's a festival that prides itself on original performances of classical, romantic, modern and contemporary music; it aims to convey the power of music through new performances. And that's why I look forward to the festival so much each year. Oh and if it doesn't feel like a year since the last festival, that's because it isn't: as of 2014 the organisers have switched the festival to early spring rather than autumn.

Also on the programme last night were John Adams' The Chairman Dances (1985), Shostakovich's Chamber Symphony opus 110a (1960) and Human Voices Only (2014), the brand new commission for the Royal Concertgebouw composed by Belgium's Kris Defoort, who was in the Bozar concert hall and came on stage to thunderous applause from his home crowd.

Belgian talent is a particular feature of this 10-year anniversary festival, with other well-known names starring throughout the two weeks including Philippe Herreweghe, Bernard Foccroulle, the Baroque Orchestra B'Rock and Muziektheater Transparant.

For the full festival programme, including those concerts that will be broadcast live on Klara radio, take a look here. Enjoy!
Posted by Anna Jenkinson at 18:28 No comments:

Email ThisBlogThis!Share to TwitterShare to FacebookShare to Pinterest
Labels: Music

We're at the Brussels Book Fair!

'What's Cooking in Belgium' is making an appearance this weekend at the Brussels Book Fair - or La Foire du Livre de Bruxelles to give it its proper name. As luck would have it, two of the themes at the 2014 fair are UK authors and cooking, so we seem to fit in rather well!

If you're in Brussels, be sure to pop by the fair and say hello.

The KlaraFestival is underway in Brussels! The theme running through this year's festival, which is largely one of classical music but also incorporates dance, theatre and film, is melancholia. As the film director Lars von Trier said, "I see melancholia as a vitamin that we all need. In all western art there is something of melancholia, otherwise something's missing."

To bring this theme of melancholia to life, three composers feature heavily in the two-week KlaraFestival: Britain's John Dowland, born 450 years ago and one of the most influential musicians from the Elizabethan period, his compatriot Benjamin Britten whose centenary is being widely celebrated this year and the Russian master Dmitri Shostakovich, a contemporary and close friend of Britten.

Last night Shostakovich and Britten were on the programme in a performance by the Mahler Chamber Orchestra conducted by the young and lively Teodor Currentzis. The concert opened with Britten's Serenade for Tenor, Horn and Strings, which was a first for me and throughout which I was totally captivated by the tenor Ian Bostridge's interpretation. After the interval the focus switched to Shostakovich, first a thrilling Piano Concerto No. 2 played by Alexander Melnikov followed by an energetic Symphony No. 9.

Earlier in the week I went to hear ‘Missa sopra Ecco si beato giorgno for 40 and 60 voices’ by Florentine composer Alessandro Striggio, the largest known polyphonic work from the entire Renaissance period. Still to come is a date with Quartet lab, a string quartet that is said to contrast established repertoire with contemporary works and improvisation.

There are also plenty of other offerings on the programme, including classical musicians interpreting Radiohead in a night club and a series of film classics all with a melancholic edge. Take a look at the KlaraFestival website to see if there's anything that grabs your attention. And if you can't make it in person, many of the concerts are broadcast on the radio.

Posted by Anna Jenkinson at 16:04 No comments:

What's Cooking in Belgium: it's out! 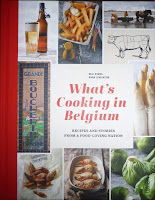 It's written, published and launched. Yes, What's Cooking in Belgium: Recipes and stories from a food-loving nation, written by yours truly and Neil Evans, is a reality…and there's far more to it than chocolate, beer and Brussels sprouts!

The book is a compilation of stories and recipes, grouped thematically, which together tell the story of Belgium and its love of food. Illustrating the recipes are fabulous photographs, for which neither Neil nor I can take any credit. For those we have the food stylist Hilde Oeyen and the photographer Diane Hendrikx to thank.

The Brussels launch took place last week, supported by the publisher Luster, the English language bookshop Waterstones and Le Meridien hotel. We had a brilliant evening! We both really enjoyed giving our presentations, explaining how the book came about and how we went about researching and writing it, and were extremely pleased that so many people followed up with interesting questions. It was also fun signing copies of the book afterwards!

For more information about the book, please take a look at the publisher's website. For now, the easiest places to order the book are directly from the publisher, at Waterstones Brussels or simply get in touch with me.


Below are a couple of photos from our Brussels launch. Today Brussels, tomorrow... 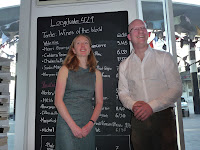 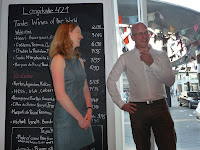 Posted by Anna Jenkinson at 16:39 No comments:

Anna Jenkinson
As a freelance writer, I have the opportunity to write on many different topics, including my love of the arts. Here you can read both my blog posts and some of my published articles. Please click on 'Biography' at the top of my home page to read more.

View my complete profile
Email me

A small selection of my published articles